To create a piece of engaging, shareable video content that cuts through the clutter of April Fools’ Day and highlights Virgin Australia’s ‘lighter’ side. The content must be consistent with Virgin Australia’s mission, ‘to deliver the world’s most engaging, stylish and effortless flying experience’ to all customers.

Following the success of Virgin’s last two April Fools’ Day campaigns, this year we leveraged Australians’ love of dogs and the fact that statistically, we respond well to sentimental content - especially that which includes cute pups and kids. This insight led Pulse to introduce the world’s first canine crew to Australia in 2017.

Pulse produced a piece of comical digital content; a video introducing Australia’s first ever canine crew. The video was filmed at Virgin Australia’s Training Centre and was created to engage fans, and drive shareability. The video was released on Facebook on the 1st April accompanied with the tag line, “Today we are excited to unleash our new Virgin Australia Canine Crew in a world first initiative. On select flights, a Canine Crew member will work alongside our award-winning Cabin Crew team to offer a range of additional services. Congratulations to all pooches who have completed their rigorous training program and officially take to the skies for the first time today”.

The video generated more than 1.7 million views across Virgin Australia’s social channels, with 15,120 shares, over 67,000 reactions, and a total social reach over 12 million hitting global audiences. News coverage ran in 30 outlets including all Australian metro broadcast and news sites such as Channel 7, 9, 10, News.com.au, HuffPost and The Daily Mail. Not only did the video hit local outlets but it also reached international news outlets such as Time Magazine (US), BBC (UK), The Independent (UK) and CTV News (CA). Virgin Australia also received 7 job applications with fans sharing photos of their dogs pitching them to be part of the new canine crew. 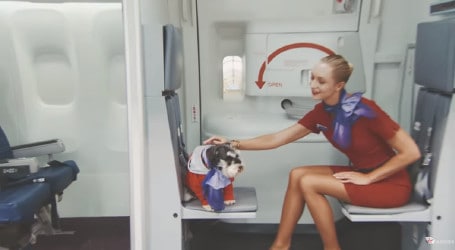