The retail sector is particularly cluttered in the run up to the crucial Christmas period with many brands vying for the limited attention of the present buying public. In order to cut through in this busy period eBay needed to do something truly attention grabbing and innovative.

Global eBay research revealed that 37% of Aussie shoppers source their inspiration for Christmas gifts from what they see in shop windows and 27% of Aussies admitted to feeling disorganised when it comes to Christmas shopping. While many Aussies source Christmas present inspiration from shop windows, consumers are also increasingly turning to their mobile devices to make Christmas purchases. eBay predicted that 2.6 million people would visit eBay.com.au on Australia’s Busiest Mobile Shopping Day on December 7th, with 1.5 million visiting via a mobile device.

With this in mind, we decided to modernise the seasonal tradition of visiting beautiful Christmas windows and bring eBay offline and into the physical retail space by creating Australia’s first ever shoppable windows on the forecourt of Customs House, Sydney. The carefully curated windows showcased a collection of themed gifts, inspiring customers’ Christmas purchased and making the whole experience instantly shoppable 24/7 via mobile, to tie in with the Busiest Mobile Shopping Day. The interactive windows contained live actors, bought the best of online shopping into the physical world; merging physical items with seamless online shopping into one end-to-end customer experience.

Foot traffic through the space hit over 10,000.The campaign achieved over 240 pieces of coverage including broadcast coverage hits on Channel Seven News and Ten Eyewitness News. Both pieces were syndicated across the nation and reached over 987,000 people. Additional coverage highlights include print coverage in key Australian metros, The Herald Sun, Gold Coast Bulletin and a second page picture in the commuter paper mX (which alone reaches close to 300,000 people). Further metro coverage was achieved in SMH online, The Age and news.com.au Australia’s widest reaching online news network. In total the campaign reached an audience of 40,291,983. It has since led to further retailer acquisitions. December 7th 2014 was eBay Australia’s busiest ever day, with 2.62 million visitors surpassing the predicted 2.6 million, 470,000 items sold and total of $16 million worth of goods traded on the day. 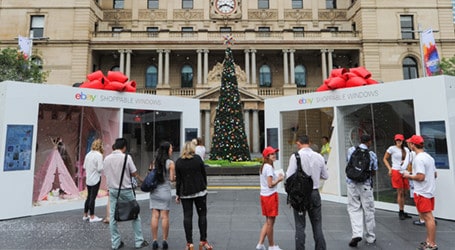 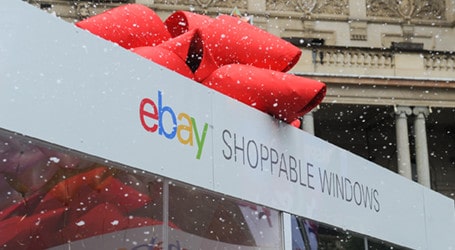